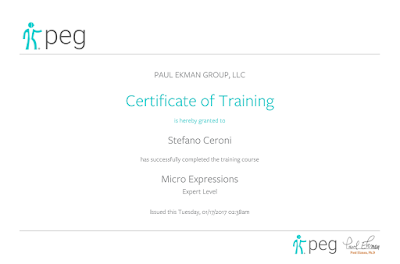 
Micro expressions are very brief facial expressions, lasting only a fraction of a second. They occur when a person either deliberately or unconsciously conceals a feeling. Dr. Ekman’s research has revealed that seven emotions have universal signals: anger, fear, sadness, disgust, contempt, surprise and happiness. You can learn to spot micro expressions using the micro expressions training tools personally developed by Dr. Ekman.

Haggard and Isaacs were the first to describe micro expressions (calling them “micro momentary expressions”) in their study of psychotherapeutic interviews. They explained the appearance of “micros” as the result of repression; the patient did not know how he or she was feeling. Haggard and Isaacs also implied that these fleeting expressions could not be recognized in real time, but Ekman and Friesen later showed that, with training, anyone could learn to see “micros” when they occurred. Ekman and Friesen also broadened the explanation of why micros occur.

In 1967, Dr. Ekman began to study deception, starting with clinical cases in which the patients falsely claimed not to be depressed in order to commit suicide when not under supervision. In the very first case, when films were examined in slow motion, Ekman and Friesen saw micro facial expressions which revealed strong negative feelings the patient was trying to hide.

Micro expressions happen when people have hidden their feelings from themselves (repression) or when they deliberately try to conceal their feelings from others. Importantly, both instances look the same; you cannot tell from the expression itself whether it is the product of suppression (deliberate concealment) or repression (unconscious concealment).
Pubblicato da Stefano